Check out my workshop at NDC { Oslo }
May 22-23 Simple by Design: Declutter Your Architecture, Code and Test

On the geometric beauty of programming

With simple shapes to represent a program: circles for values and arrows for computations, we can reveal simple yet powerful ideas that can make big differences in how we see, design and implement software.

More importantly, there are geometric beauty to be found, awareness and observation of which can be rewarding.

Statements vs Expressions, forward or backward?

Let's start with statements and expressions. Take this small example,

The above code uses statements, as most of us were taught to do when learning programming. A statement does not return a value, instead it assigns to or mutates a variable, or has side effects such as writing to a file.

In our case, when an assignment is executed (isGoodMorning = false), it creates no new value; instead it mutates an existing variable isGoodMorning that is declared previously, hence the dotted lines that go backwards. Depending on the choice of mutations the outcome of the program is different.

Local variables require the arrows to go back locally, which is not THAT bad; class fields, global variables can be nastier, as they require the arrows go outside of the current code block; moreover, such variables are fair game, they can be mutated elsewhere, at arbitrary locations. We poor programmers must stay alert all the time: "Has this.foo changed since this code was last run?! Or would it when it is running?"

Alternatively, the same function can be implemented purely with expressions, and for complete absence of mutation.

This can be represented as below.

These are incredibly powerful assurances to have, and it puts an end to the anxiety of variables being changed unexpectedly. This is what straight-FORWARD code really looks like - people may contend that statement-based programs can also be "simple" or "clear", that maybe, but remember, they will always be BACKWARDS in the literal sense.

Let's look at this function that sums up numbers in a list.

Simple enough, and it's illustrated as below. 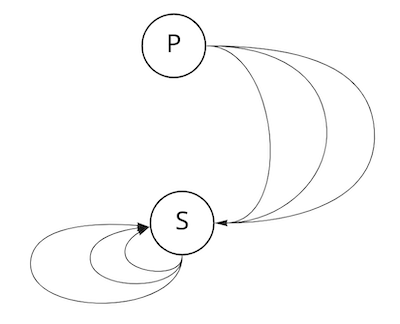 It looks harmless enough at first sight, until we ask the question, what was the value of state in the nth iteration?

Sure we can add code such as if (p == 1) then log(state), or introduce more code to keep the audit trail; the point is, without special care, past state gets overridden and disappears (like tears in the rain - sorry I couldn't help it).

For coding with immutability, loops are usually the first serious road block. The expression-based answer is none other than recursion, best implemented with pattern matching and induction. for our example,

And it is illustrated as, 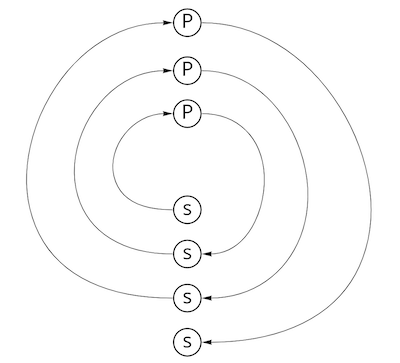 Here P stands for the parameters to the sum function, in this case, numbers and state. What's happening here with this shape that looks like a snail shell or a stair-well?

Again, a simple idea that is not to be underestimated! This is behind some of the most powerful architecture styles or frameworks out there. Some reader would have recognised the similarity to fancier diagrams in the wild, buzzwords and phrases such as Reactive, Redux, Event-driven, Event-sourcing, One-directional data-flow, Time-traveling, etc.

One-directional - does that remind you of expressions? And hello, Reducers!

Previously we compared error handling with values and expressions, also with diagrams, which can be brought into the mix. About time!

But this is an illusion at best, because as we all know - each of these innocent looking function can throw exceptions and blow up calcDiscount, as it doesn't take special care to catch!

To recap, these below questions are never really answered satisfyingly (despite noble efforts from Java)

Something worse but less talked about. As exceptions could carry arbitrary payload, in a way, they actually account for arbitrary return types for any code. It's dynamic typing in disguise. A loop-hole in many so called "strongly-typed" languages.

On the contrary, value based error handling, especially with the support of union types, brings sanity.

This is not nearly as smart as exception-based error handling, and requires much less magic. It can be more verbose in simpler languages (as is the case with Go), but when supported with more advanced facilities (as in Rust, F#, Elm and Haskell), it can look very neat, as in the example above.

Syntax aside, this style of error handling can assure us that,

Such assurances scale incredibly well with lines of code and aggregation of complexity.

Previously we discussed one big difference between designing with inheritance and Unions. To recap,

An inheritance-based design can be illustrated as below,

Consider the popular "Strategy" design pattern. The idea is to branch as early as possible to choose the applicable "Strategy", after that, following code path should not care which implementation has been chosen; it's an anti-pattern to peek the type of the chosen strategy to introduce ad-hoc logic, such as

When a new implementation is added, a new branch appears, which shouldn't interfere with existing branches, nor should it require changes to existing implementations; this is the beauty of well thought-out object-oriented design.

The story and the diagram are both quite different with Unions. With the assurance of a union type being closed, and exhaustive checking that's usually provided by languages, we are empowered to embrace branching.

This will look more verbose than the inheritance-based diagram at first sight, but it affords extra benefits,

You would found the similarity in the diagrams - union type is what enables value-based error handling. It's quite a handful to design and implement with inheritance - despite many noble attempts!

I hope the diagrams in this post help shed lights on some of the choices made in day-to-day programming, and how such choices can result in different levels of conceptual simplicity/complexity.

It's a misconception that we only need to call for simplicity only required when things get complex, this is not the case! Simplicity scales truly if it's respected from the get-go; as complexity aggregates, so should the assurances of correctness, true scalability and geometric beauty.